Most people will agree that interviewing is one of the most difficult and least enjoyable professional activities in which we engage. Given the recent demand for data analytics and data scientist skills, it has become an increasingly daunting task for managers to adequately test and qualify candidates.

Our team at TCB Analytics has interviewed hundreds of individuals with various backgrounds over the years and needed a more efficient way of quantifying technical and cultural fit. This led us to design a deceptively simple data exercise, which reveals a surprising amount of information about the interviewees. We’ve administered this test to dozens of candidates and were compelled to share our learnings as well as the test itself. 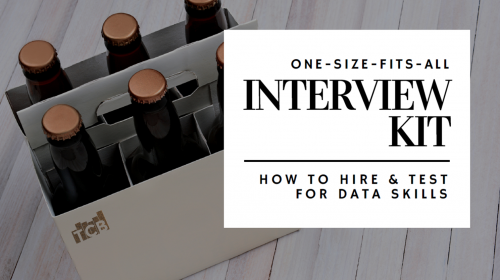 In an effort to make the interviewing experience a bit more fun, we use a dataset that involves beer. This dataset consists of 1.5 million beer reviews from Beer Advocate. It is an ideal dataset for testing candidates since it is too large to fit into Excel, but small enough to process on a single laptop in Python or R. We prefer that candidates complete the test in either Python or R, and generally if they are hesitant about using or trying to learn either of these languages, that should signal a red flag.

Now onto the test. Here are the questions and instructions that we give to the candidates:

This test is extensible because the questions only require the candidate to do several basic things well:

However, some of the questions and concepts can be non-trivial and this becomes clearer when giving the test to more experienced candidates. For example, we’ve had wildly varied responses to this question: “If you had to pick 3 beers to recommend using only this data, which would you pick?” We’ve had candidates develop full-blown recommendation systems, some that have used Principal Components Analysis and more junior analysts that have used simple averaging and ranking of the beers. There’s no single right answer.

Another good example arises when answering questions 2-4. These questions require a certain amount of data in order for the findings to be considered valid. Some of the beers only have 1 or 2 reviews, so it would make sense to determine a cutoff before including those beers in the analysis. The candidate should justify how they determined this cutoff, but the responses will vary based on the approach.

Finally, don’t expect to hire a unicorn that can do everything from data munging and engineering, analysis, visualization and also be stellar at communicating. The person responsible for managing your data team should take this test and determine the skill levels and responses appropriate for your open positions.

Lastly, if they’ve managed to complete this test with little to no glaring errors and can justify their approach – hire that person. They’re likely already far ahead of most candidates.